In the period leading up to Christmas, I was caught driving just above the speed limit. Instead of getting a fine and points deducted from my driving licence, I was offered a chance to attend a Speed Awareness Course. I did attend the course, and I did learn a thing or two about speed limits. For instance, I learned that a series of street lights placed at no more than 200 yards from each other, in a built up area, indicates a speed limit of 30 miles per hour (unless otherwise indicated, for instance by a 20 mph sign – more here). Interestingly, though, the course also showed me a few principles about audience engagement, which I am going to copy for my own teaching and public speaking practice. 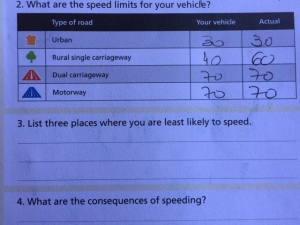 The trainers acknowledged the mood right from start, for instance by saying things like ‘I know that you would rather be elsewhere on this Monday, afternoon’. Another way was to ask a series of anonymous questions about perceptions and attitudes, and displaying the results. This served a number of purposes:

Two other things that the instructors did and that I thought were particularly effective at dealing with the mood in the room was to:

Roughly the session was structured this way:

Occasionally, there would be references about how people could find more information about related topics such as road or car safety. But the conversation stayed firmly within one topic.

I am entirely guilty of trying to cram too much content into one single talk, or blog post, or lesson. This is because I want to share all I know with the audience. However, I can see that by trying to give the audience ‘more value’, I may be actually confusing them. I suppose this is one of those cases of the road to hell being paved with good intentions.

The mixture of topic (dry) and audience (unwilling) means that the default attention span in the room was quite low. To deal with this, the tutors first instructed us to put our mobile phones away and were very clear about the negative consequences of failing to do so. Then, they made the session highly interactive by interspacing short bursts of content with:

I was quite impressed with the use of the audience response systems. It was a quick and non-intimidating way of gauging the audience’s opinion on something (for instance, attitudes towards speeding, as I mentioned earlier), as well as a great way of gauging knowledge levels about some sub-topics… and, then, adapting the delivery, accordingly. Now if only I could I find a system that is as interactive and anonymous as the automated response system, but more flexible and less expensive to use in my classes. Maybe using mobile phones… Any ideas?