Brexit. That’s what dominated my June 2016 – first, the worry about it; then, the feeling of despair at the outcome. Which is a shame, because there were many good things happening this month, too, such as the graduation ceremonies.

Moving on… Here are my highlights from June. Tell me yours, in the comments below.

I conducted a pilot study for the project that I mentioned last month… and I am very happy that I did that because it showed a significant flaw in the design of my questionnaire.

When I tell students that they need to run pilots of their surveys or interview guides before they launch into data collection, I am usually greeted with a “but do I really have to?”. They feel that, surely, everyone will understand what they mean, and that there will be no problems with timings, etc.  Yet, there usually is some sort of problem. Sometimes, it is something minor, like a typo or the survey / interview taking a bit longer than expected. But, other times, it can be more serious like the person not understanding a question and, hence, giving a misleading answer or not being able to answer all together. Or it can be a link not working, or something being deemed offensive.

In this case, the terminology that I used led participants to say ‘I never do that, so I can not help you’. Yet, when I rephrased the question, it was clear that they did, and that they had lots to say.

Other than that, I have been thinking about a new project on digital platforms, and exchanging ideas with two colleagues in other institutions. It is still very early days, but it sounds like an exciting line of work – it was their idea, actually; not mine (and I am very grateful that they thought of me).

Oh, and I joined the ‘International Research Conference’ that took place at Brookes. I presented my work on algorithmic decision making, and heard about fascinating work on orchestras as decision making units, and the nature of conceptual frameworks, to name a few.

I finished revisions on one paper, and submitted it again. It took me much longer than I expected, as I had to rethink the framework, recode the data, and rewrite significant chunks of it – but, on the plus side, I think that it is a much stronger paper. So, yes, the reviewers were right! Fingers crossed, the paper will now be closer to acceptance. (Not familiar with the academic publication process? See here).

Once those revisions were out of the way, I did some work on a co-authored paper, and went back to work on another co-authored paper which has been neglected for too long (but which I am determined to submit this summer!). Please hold me accountable on this, will you? 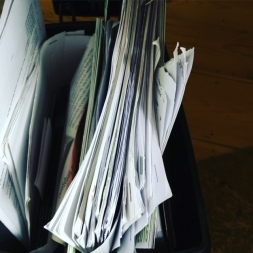 The most interesting thing this month, teaching-wise, was preparing and running a workshop on using social media in student recruitment, with my colleague Diana Limburg. I wrote a post about it, here.

This month saw the Science Festival and the Arts Festival, and I attended a few sessions. So, I have been learning about a variety of things, from insect eating to mental health.

What were June’s highlights for you?