Last month, I had the amazing opportunity to meet Mark Schaefer in person. He delivered a talk at Oxford Brookes University and generously answered our many, many questions about the future of digital, and the impact for individuals and organisations.

I created an article over at Storify about the first part of that talk. It includes some tweets from the audience, using the hashtag #msobu. This is a shortened version of that story. Enjoy! 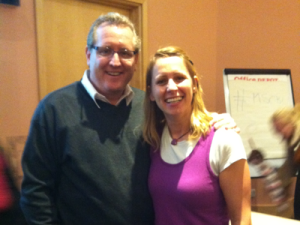 We all know that.

We all know that face-to-face contact has been increasingly replaced by interaction mediated by several forms of digital technology. But what are those forms and what do they mean for marketing?

Luckily for students, staff and members of the wide Oxford Brookes University community, this was exactly the focus of a talk that Mark Schafer delivered at the Business School, during a recent visit to the UK.

It is not by chance that Mark is among the most acclaimed and accomplished social media consultants and authors in the USA. He has been nominated by Forbes magazine as one of the “Power 50” social media influencers of the world and by AdAge magazine as one of the “Power 150” marketing bloggers. He is the author of best-selling books ‘The Tao of Twitter’ and ‘Return on Influence’ and has appeared in the New York Times, CBS, Fox News, INC Magazine, MSNBC, Business Week, Entrepreneur magazine, and many other publications. He knows what he is talking about. [Side note: and he is a GREAT communicator. If you ever have a change to listen to him, grab it.]

Layer 2. Information eco-system
Increasingly, though, websites are not the customers’ only – or even the primary – destination. Someone looking for information about your product or company, will not only see your website, but also come across information in other websites.

For instance, if you searched for information about Mark’s hometown, you might come across various resources on Flickr, YouTube and Slideshare, to name a few… and not all depicting the town in the best light.

Firms need to think beyond the website, and also consider the other elements in the customer’s information eco-system. In fact, Mark went further and said that firms had to ‘methodologically and patiently build (their) story on the information ecosystem’.

Layer 3. Social
Social Media – love it or hate it, there is no getting away from it. Because, you see, for many people social media is more than a website. It is lifestyle. That’s why Mark Schaefer call this the engagement layer.

For a very significant proportion of the population, Facebook (or the leading ‘local’ social network) has become the Internet – the way they access information, communicate and, increasingly, spend their money. Oh, yes they do! Farmville and, now, the app store are just two examples.

And before you dismiss this layer as a quirkiness that marketing managers in consumer markets have to deal with, remember that, in business to business (B2B) interactions, the first stage of the (long) purchasing cycle is done online. Indeed, in reply to a question from the audience, Mark said that he felt that social media was particularly important for B2B markets.

Layer 4. Mobile
According to mobiThinking, as of February 2012, there were 5.9 billion mobile subscribers worldwide – that’s 87% of the world population. More than 85% of new handsets are web-enabled phones and an increasing percentage of web-users only access the Internet via their mobiles (25% in the US, higher in other parts of the world).

Such statistics mean that companies really need to ask themselves: ‘how does my company look to the world on a (small) screen?‘

Organisations also need to consider carefully their mobile advertising strategies, and the impact of mobile payment systems in their businesses.

Layer 5. Augmented Reality (AR)
[New to AR? Check what it is all about here]

Augmented reality imposes a digital layer over the physical world. Its applications are varied, from games to military, shopping to education. And these are the early days, only.

AR may soon be embedded in contact lenses or glasses, providing truly rich, personalised experiences, without customers ever needing to log on to a computer.

Layer 6. Gaming
We love playing. And we love to play games. We like progressing through levels, acquiring new skills, earning new widgets and so on.

Knowing that, more and more organisations are adapting ideas from game playing to the way users consume their products. This approach is called gamification.

Gamification brings together 3 drivers of human behaviour: motivation, ability and triggers, as explained in this article. By integrating the three, organisations can create truly engaging experiences for their customers.

The Implications
Each of these layers brings its own challenges and opportunities.

It brings challenges because different layers require different strategies, because it requires significant investment, and because the rate of change is accelerating.

It was a truly interesting presentation. Thank you, Mark.

Did any of these layers surprise you? Personally, I had not considered the information eco-system. It was obvious that it had to be included, once Mark mentioned it… but it was not something that I had specifically acknowledged.

What other elements would you include?