I wonder if people need to capture and share evidence of a moment, in order to feel that they have lived it.

I am on my way back from a concert.

Around me, people were snapping pictures with their smartphones, which they quickly shared with others in their social networks. Look at the man on the left hand side of this picture: 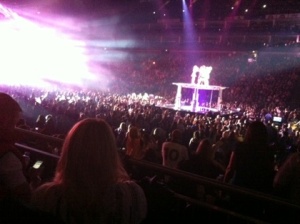 They would take the picture, switch to a social network application and post it. Then, the ritual would be repeated. Over and over again. I spotted Facebook and Twitter, but there may have been others, too.

Maybe these persons were sharing the event with someone who couldn’t be there and it was an act of altruism.

Maybe they were showing off, in a moment of narcissism.

Altruism and narcissism are two of the drivers of use of social media as I wrote here.

I wonder, though, if there was another driver.

This is a time when we check virtually into places we are physically in; when television shows have their own Twitter hash tags and Facebook timelines; and when tagging and sharing pictures of what we are eating is so popular that there is an app for that.

Maybe adding a virtual, social layer to everything we do, is becoming a part of the experience. Maybe one day, in the not so distant future, we will have to share the moment in order to feel that we have lived it.

Do you think that just like the tree in the forest, if you didn’t share the moment, you haven’t really lived it?