#followfriday (or #ff) is a tradition started by Micah Baldwin (according to Mashable), whereby you name Twitter user your followers should know about. In addition to naming interesting users on Twitter, I provide a bit of background information on them in here. Enjoy!

I am a firm believer in the maxim ‘Mens sana in corpore sano’ (a healthy mind in a healthy body).

Sitting down for long periods of time, apparently, causes a host of health problems. I am in awe at the creative ways my friend Angie found of being active during her workday but I am not that organised. My fitness regime mostly consists of going for a run outdoors, which I do most days.

My main source of advice and inspiration, when it comes to fitness, is Tim Weeks. He is a coach and personal trainer, whose own Olympic dreams were dashed by a terrible bike accident. His tweets – under the handle @tim_weeks – are both motivational and useful. For instance, he regularly shares tips on becoming structurally strong, highlights the benefits of interval training and points out common exercise mistakes such as allowing your knees to move over your toes, when squatting. He also hosts a chat on Tuesday evenings, with the hash tag #TWQT.

Most importantly, though, Tim is not an exercise fanatic. Alongside encouraging you to run a bit farther, longer or faster, he also highlights the importance of sleep, listening to your body and simply enjoying exercise. This last point came home to me earlier this week. Lately, I have been very focused on longer runs and catching up with my goal of running 2013 kilometres this calendar year. Just as I was choosing my playlist, I quickly checked Twitter and saw this update from Tim:

I love running but the #2013Kms challenge means that, sometimes, going for a run feels like a duty rather than a pleasure. So, that day, I forgot about kilometres and, instead, I asked my 5 year old if he wanted to come with me. His eyes lit up and he dashed to put his trainers on (if only he were this fast on school mornings!). We headed out together and, for nearly 1 hour, we ran from imaginary monsters, chased birds, jumped over twigs and had a wonderful time together. I was reenergised after that session… which is just what exercise is all about. 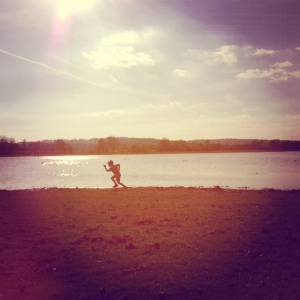 This week, follow @tim_weeks. His tweets will get you moving and, that, in turn, will improve your health and your productivity.