Since today is World Television Day (yes, there really is a day for everything!), I thought that I would share with you some findings from the report “The Common Sense Census: Media Use By Kids Age Zero To Eight’, looking at media use by young children in the US. You can access the report here. 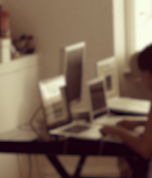 The researchers found that the overall time children spend on screens has not changed much in the last six years. The average is at 2 hours and 19 minutes per day, only three minutes more than in 2011 . However, the type of screen used has changed significantly. Perhaps unsurprisingly, mobile has seen a huge increase (almost nine-fold) between 2011 and 2017, replacing all other types of media: DVD / videotape, TV, Computer and video players.

Similar percentages of high and low income families own a mobile device, and have downloaded apps for their child(ren).

However, there is a gap of more than 20 pp between high and low income families when it comes to owning a computer and having a high speed internet connection at home. While this gap has almost halved in the last six years, it is still significant.

Other interesting findings from this report include:

In summary, television as a device is losing its appeal among high income families, but not among low income ones. Mobiles are ubiquitous; and the digital divide seems to be narrowing, but it is still an issue.

One thought on “Use of screens among young children”