Artificial intelligence is as biased as the data used to train it, and the coders programming it. Last week, I came across a simple exam of the latter: It turns out that, if you are in England and ask Google Home to “play the national anthem”, you get the US version.

Last week. I was browsing the second-hand book sale at Brunel, and found a copy of the book “The Double Helix”. 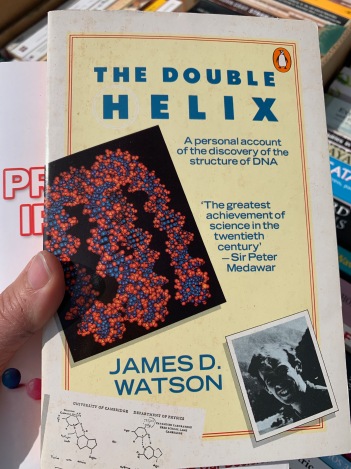 But this book also shows that amazing discoveries are a mix of talent, hard work, perseverance / grit… and luck. [Sadly, the book also shows how the work of female scientists like Rosalind Franklin was routinely silenced in favour of the men, and was erased from history… But that is another story].

I was at an event dinner, recently, and found myself seating next to a lady from Japan whom I had never met before. I told her about a former colleague of mine who is on sabbatical in Japan, and how much I love to see the photos that he is sharing. I showed her his Instagram account, and she was really amused to see what had caught his eye, as a foreigner living in Japan. We had a lovely time, chatting about some of his photos.

I often complain about social media being a killer of conversations. But, this time, it helped fuel a very interesting one.

Coursework marking done. House hunting seems to be over (fingers crossed). Working on paper revisions and planning next year’s teaching for the department. What does the week have in store for you?