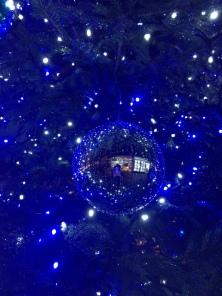 There are two topics of conversation that you are sure to encounter at one point or another, during Christmas season, in the UK. One, is the likelihood of a white Christmas (spoiler alert: very unlikely!). The other is the various Christmas adverts put up by the major brands.

The level of consumer conversations about an advert – called advertising WOM – can be an indicator of the effectiveness of an advertising campaign, alongside metrics such as reach, likeability or persuasiveness. So, creating a buzz around the Christmas adverts, would be good news for businesses, which, according to the Guardian, have spent a record £5.6bn in advertising, during the Christmas period.

But how much of the buzz around Christmas adverts will actually translate into additional sales, for the brands in question?

According to research done by Professor Jenni Romaniuk, advertising WOM can cause ‘a large shift in brand choice probabilities’ in 8% of the receivers of WOM (i.e., the person hearing someone talk about the advert), and a ‘small effect’ or ‘nudge’ in 22% of the cases. Not bad, right?

And that is not all.

Advertising WOM can also have positive effects on the WOM sender (i.e., the person who saw the advert, and is telling someone else about it). Romaniuk explains it as thus:

‘The act of talking about the brand does make the brand more salient to the giver. This reinforcement can enhance the giver’s likelihood of buying the brand’.

Another benefit of advertising WOM is that it can stimulate additional conversations about the brand, and generate indirect effects. That is, A tells B, and B tells C, who may then be inclined to buy the product.

Beware, though. According to the same study, as much as 4% of advertising WOM receivers may be put off buying from the brand. This can happen when the advert causes controversy, or when the receiver does not trust the opinion of the WOM sender – teens and their parents, come to mind, here… 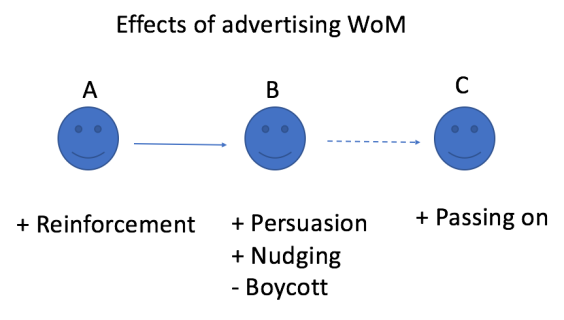 So, it seems that, when it comes to advertising, if you are going to spend the money, then it pays to give people something (good) to talk about.

Which Christmas advert caught your attention?

The Polish grandpa one (which I heard of, through WOM) brought a tear to my eye… though as I am not in that market, it had no influence on me as a consumer. I quite like M&S’s Mrs Claus (maybe it’s that red snowmobile) and their food adverts make my mouth water. Every Time.