Dr. Robin Croft, a fellow academic and much valued commentator here on the blog, drew my attention to an ethnographic study that he carried out with two other colleagues [1], on how different genders talk about products, services and brands.

Croft and his colleagues observed informal conversations between various groups of people. Each group had only male or female participants, and they all knew each other, already. So, this study was as close as you can get to hearing friends or colleagues sharing their experiences or views about the products and brands that are meaningful to them.

As captured in table 1, the research team found significant differences between the all-male and the all-female groups in terms of content of the conversations, as well as the extent of information exchanged and the dynamics of that exchange. 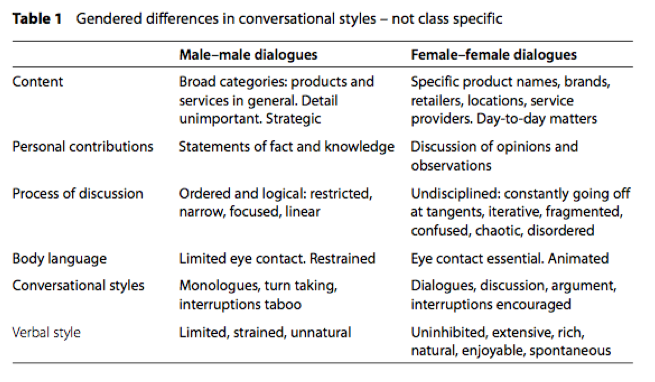 For instance, while the men tended to talk in broad terms (e.g., about the product category), the women were more inclined to talk about specific product names or service providers. Likewise, the conversations in the all-male groups tended to be rather linear, and use a limited verbal style. By contrast, the all-female groups engaged in very iterative conversations, using rich vocabulary and frequently interrupting each other.

the key source of power was knowledge, and respondents appeared to be using it to make power statements and to position themselves vis-à-vis other group members. Many of the male interventions seemed designed to show the speaker in a new light – intelligent, articulate, well informed, widely travelled, well read, and so on (p. 726)

This paper certainly gave me some food for thought about factors to consider when analysing social media conversations. What about you?

[1] Croft, R., Boddy, C. and Pentucci, C. (2007) Say what you mean, mean what you say: An ethnographic approach to male and female conversations. International Journal of Market Research 49(6):715-734 available here